Saltar al contenido
09/03/201820/11/2018 patriciamartinrivas
As a feminist activist, my focus is on the visibility of female writers and artists in public places. So far, I have created and orchestrated, with the help of many people, two activist performances to demand stronger representation of women on the streets.
#CreadorasLetras took place in Madrid (Spain) in January 2017 with the help of  the organization Orbita Diversa. Calle Huertas is a prominent street in downtown Madrid, known for the golden inscriptions on its cobblestones. These are literary quotes from the greatest Spanish writers who lived in the city — currently, not one is from a woman. I conceived and orchestrated a performance that consisted of dozens of women ritualistically adding quotes by female authors in chalk and reciting excerpts of books written by women. This protest had immediate repercussions, and less than ten days later the City Council passed a motion to add quotes by female writers to the street. A list of the media we were featured in can be seen here.
#NameHerToo was a protest for International Women’s Day 2018 in Palo Alto (California), organized with the help of concerned locals and Stanford students. This city has 28 streets named thematically after authors in the downtown, but no female writers are included. On March 8th, we gathered at Lytton Plaza to celebrate local women and make the case for renaming this downtown square after one of them. We were discussed on the most important Swedish feminist webpage, Feministiskt Perspektiv, and appeared on the cover of the Stanford Daily. 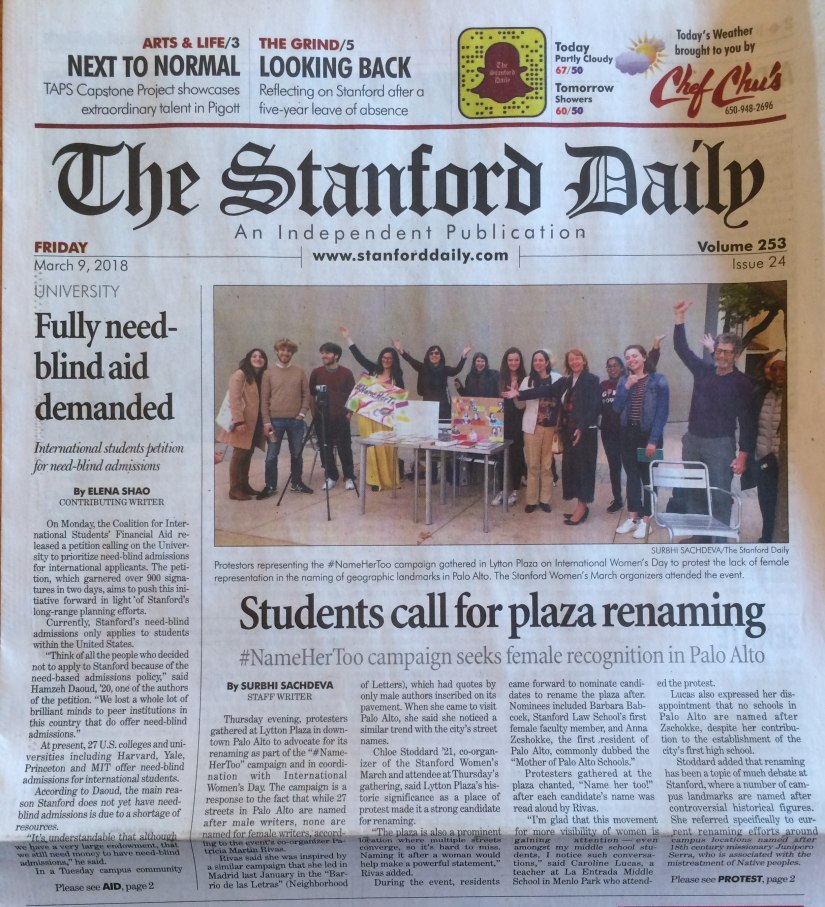