The Oath of the Horatii
Jacques-Louis David, 1784, Louvre Museum

Let’s face it — most visitors go to the Louvre Museum to see the Mona Lisa (or, more specifically, to take distant blurry photos of this overrated painting). Most of them also leave the museum without seeing many important works of art, amongst them The Oath of the Horatii. This is one of the greatest works of Neoclassicism, a movement based on the aesthetic values of old Greece and Rome for which symmetry and detail were paramount. In this huge painting, David depicts a 7th century BC story with only nine characters: the three overly-patriotic Horatii (on the left) lift their swords and swear to their father (in the middle) victory or death, leaving their mother, wives, and kids (on the right) in sorrow, perhaps for the last time. The tension is eased by the geometry, and the intricacy is simply breathtaking — one could spend hours merely contemplating the details on the leg of the first Horatius. 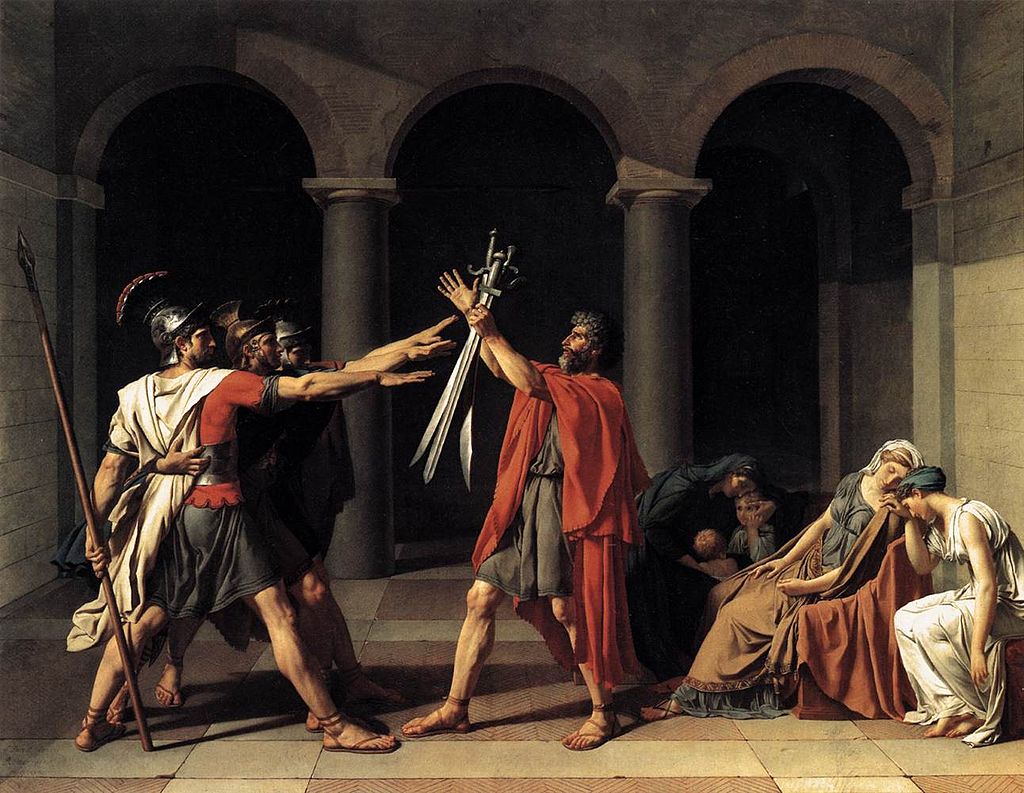 Parisian salons in the 19th century had the crème de la crème of French society and no shortage of scandals — especially in the Salon des Refusés, to which the worst works were banished. Luncheon on the Grass was rejected by the biggest Parisian salon, but even in the Salon des Refusés, it had a lot of detractors who insisted that it be taken down. Perhaps it was the first time they’d seen a naked woman in a painting? Well, obviously not, but always before it had been an idealized, unreachable goddess. Their impression from this painting was that that naked woman was nothing more than a prostitute, and that was outrageous — at least, to show. The alleged infamy of the piece didn’t stop it (or maybe helped it, actually) from becoming one of the most iconic paintings in the history of art, and one of the most imitated. There is, for example, a 1964 version of Luncheon on the Grass (with the same name) in the Centre Pompidou, by the French pop artist Alain Jacquet.

Even if she never exhibited any of her works with the Parisian impressionists, Gonzalès’ style led her to be considered part of this movement — after all, even her teacher, Manet, was excluded from these exhibitions. Very few women are acknowledged as part of the history of art, but there were some bright lights amongst the impressionists — most notably three, Eva Gonzalès, Mary Cassatt and Berthe Morisot, and many of their works are in the Musée d’Orsay. They normally depicted women in a domestic atmosphere (many times with children), since that was, after all, their main role in society. Gonzalès learned from Chaplin and Manet, but she soon developed a very personal style, creating intense portraits full of emotion. In A Box at the Theatre des Italiens Gonzalès chose a public atmosphere but made it very intimate, due to the black background and the amazing detail in the clothing and accessories of the two people depicted. These two characters — in reality, her husband and her sister — seem to have a distant relationship and to be very close at the same time, and the woman’s expression is especially interesting due to its ambiguity. Unfortunately, the artist died after giving birth to her child when she was only 34, and her husband actually ended up marrying the sister pictured in the painting! 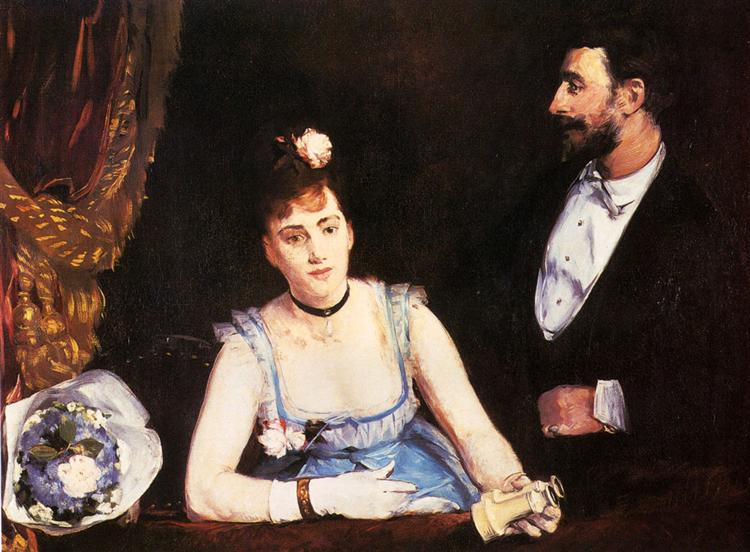 Even in the frantically hyper-modern 20th century, only a few women were allowed into elite artistic circles. Painter-dancer-weaver-designer-photographer-etc. Sophie Taeuber-Arp was one of the lucky ones and was accepted in the male-dominated Dadaist world. One of her most famous works is her series of heads, some of which can be seen in the Centre Georges Pompidou. The Swiss artist considered these colorful wooden heads on pedestals to be parodic portraits and functional hat-stands. Apart from mentioning Dada in some of them — as all dadaists tended to — she simplified the main concept by creating abstract geometric interpretations of reality, avoiding any physical or real resemblance. Some of them also resemble African masks, an influence on many artists of the day, starting with Picasso.

In the last 31 years of his life, French artist Claude Monet painted around 250 versions of the water lilies of his garden in Giverny, in the north of France. Nowadays many are scattered across the the important museums of the world, but one of the most impressive ones is the one in the Orangerie Museum, with dimensions of 2 x 12.75 meters. The immense size is not the only factor that makes one feel inside the work, as the amazing technique irresistibly attracts the viewer to its beauty. Monet’s Impression, Sunrise was the painting for which Impressionism was sarcastically named. This movement was mainly based on capturing light and studying how as light changes, vision (and thus the artwork) changes correspondingly. He also painted 30 different versions of the Rouen cathedral between 1892 and 1894, some of which can also be enjoyed in Paris, at the Musée d’Orsay. 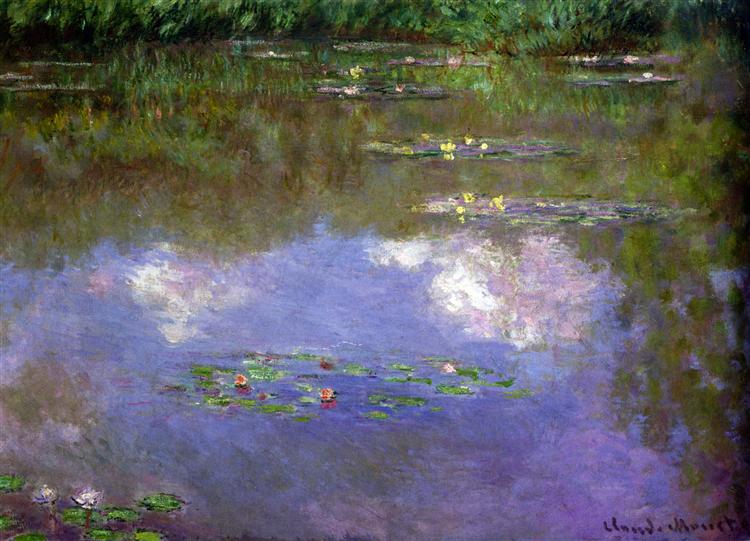 One of the main practices in the explosion of artistic creativity in the first half of the 20th century was appropriation, which essentially means transforming an artistic reference piece into a new work of art. Emmanuel Radnitzky, better known as Man Ray, did this — many times — including in this 1984 work where he modified one of the most famous representations of an Odalisque (the original work, by Ingres, is currently housed in the Louvre).

In a punny reference to the French idiom “le violon d’Ingres,” meaning a hobby, the American Man Ray painted the characteristic f-holes of violins on the French artist’s photograph of a practically naked woman (his lover, Kiki), her whole back exposed. Then he photographed the slightly altered photograph and, voilà, his glorious new interpretation was complete.

The modernist American artist spent most of his career in the artistic circles in Paris where he experimented alongside Dadaists and Surrealists and created his famous Rayographs, photographic images made without a camera.

“Good artists copy, great artists steal,” Picasso said. He was obviously a genius, so he stole a lot — as well as creating, of course. In the museum dedicated to his work in Paris (a city where he spent many years of his life), one can admire a lot of his works, both original and stolen. Picasso is known worldwide for his great contribution to the development of modern art, especially cubism, and applying his characteristic style — solidity, flatness and different perspectives — to reimagine old works of art. In this case, Picasso made a series of 58 paintings of the famous Las Meninas, by his compatriot Diego Velázquez, whom Picasso admired deeply This entire series is in Barcelona, but he also painted some of the characters independently on different materials, like ceramic here, some of which can be found in Paris. And though he termed it stealing, these versions of Las Meninas have strong character and a whole new perspective, breaking all rules of representation.

Yves Klein was linked to movements like Pop Art and Neo-Dadaism, which was actually a reaction to the introversion of Abstract Expressionism. He quickly became one of the most influential artists in the 20th century — not only influencing art but fashion! In 1960, he created and patented a color named IKB (International Klein Blue) and used it in a lot of his artworks, such as in his bronze and gold paper Portrait relief de Martial Raysse, where he recreates a classic sculpture giving it a powerful new meaning using only IKB. The color has become very common nowadays. In the late 1950’s, he also did a remarkable performance called Zone de Sensibilité Picturale Immatérielle, which consisted of exchanging “zones of immaterial pictorial sensibility,” certified with a cheque, for gold that he immediately threw into the Seine. So Dada!

The inhabitants of the Hôtel de Saint-Aignan in 1939
Christian Boltanski, 1998, Jewish Museum

The half-Christian half-Jewish artist Christian Boltanski was born in 1944 in Paris, and he met many Holocaust survivors growing up, so the terrible European genocide — alongside memory and human nature — is the leitmotiv of his work. In The inhabitants of the Hôtel de Saint-Aignan in 1939, he created an installation in the former hotel, then Jewish residential building, then Jewish Museum in the Marais, the Parisian Jewish, and now gay, quarter. His work doesn’t directly confront the unfathomable killing, but instead suggests and personalizes it. It consists of small signs, each containing a person’s name, job, and origin. Sometimes there’s also a date of death, but when there’s none, this may mean the person either escaped or disappeared — it is certain that a total of thirteen inhabitants were arrested and killed. This installation has been part of the museum since its opening in 1998, and the signs are made using ink on paper, so deterioration forces them to be replaced regularly, creating a beautiful and intense metaphor — after all, memory works that way, with the past needing to be constantly relived in order to never repeat it again.

The Thinker — originally named The Poet — is one of the most famous and most influential statues of all time. Even though it may seem like the figure is anonymous and independent, it was originally imagined as something much more specific. It all started in 1880, when Rodin planned to do a sculpture of The Gates of Hell, inspired by Dante Alighieri’s Divine Comedy — a task which would end up taking him 37 years to complete. In the gate — which the first version in plaster is in the Musée d’Orsay — one of the 180 figures is The Thinker, placed on top of the door panels, and there are several interpretations of who it is: Dante looking at the Inferno, Rodin himself contemplating his own work or even Adam, shocked at the consequences of his sin. Anyway, Rodin decided to sculpt a larger independent version of The Thinker in 1888, ultimately completing a total of 28 versions, in which a naked muscular man sitting on a rock in a twisted, unbalanced position is, of course, thinking deeply with his whole body, now to be found all over the world, literally (the Cleveland version even suffered a terrorist attack in 1970). Nowadays, it is often used as a representation of the discipline of philosophy.

Admission: Adults €9, Visitors aged 18 and under (26 and under if residents in the EEA) – free, free the first Sunday of each month
Opening hours: Daily 9 am – 6 pm, closed on Tuesdays
Address: Jardin des Tuileries Place de la Concorde, 75001 Paris – France
Getting there:
Metro: 1, 2, 8 (Concorde)
Website